On February 23, 1985, in a game against the Purdue Boilermakers the head coach of the Indiana Hoosiers, Bob Knight lost his temper and threw a chair across the basketball court. Knight, a very successful coach  was also a bit volatile to say the least. 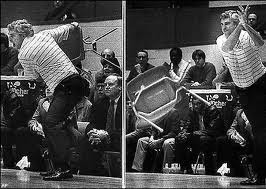 The game was a huge game for his Hoosiers and when they fell behind early, the pot started boiling and it would soon boil over. Purdue had grabbed an 11-2 lead when Hoosiers guard Steve Alford was called for committing a foul, Knight came flying off the bench irate at the call, it wouldn't take much more to set off the ticking time bomb. Less than a minute later another foul was called against Indiana this time it was Marty Simmons who helped keep the coaches steam building up. Then as Purdue inbounded the ball the refs called yet another foul on the Hoosiers Daryl Thomas, it was the straw that broke the camels back.  Knight lost his shit, the only thing it led to was a technical foul for the coach which simply stirred the proverbial pot a bit more. He turned around furious and grabbed the first thing he saw and threw it, the chair went flying across the floor toward a group of student who were sitting ground level. Some people were shocked others had seen that temper flare up before, usually it was seen in practice, this time it was seen by everyone as it led many sportscasts around the United States. The incident led to a one game suspension and two years probation from the Big 10.

It was just one of many incidents in Bob Knight's career as a coach, the temper would eventually lead to Indiana going a different direction in the year 2000. It was the end of a marriage that started in 1971. In his time at Indiana he did more than lose his temper, he won ballgames. The Hoosiers won 11 Big 10 titles and 3 National Championships with Knight leading the team. Following the dismissal from Indiana, Knight took a job as head coach of the Texas Tech Red Raiders in 2001. He led the Red Raiders to the Sweet 16 twice before he retired in 2008.  Knight will always be known for incidents like this one where he tossed a chair in a moment of anger, he will also be known as one of the best coaches to ever teach a kid the game. With 902 wins he is third on the NCAA all time wins list for a basketball coach.