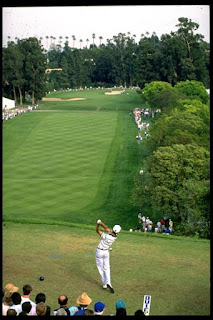 On February 27, 1992, a 16 year old kid by the name of Tiger Woods made his PGA debut at the Nissan Los Angeles Open. He failed to make the 36 hole cut, but everyone knew this kid was something special. Coached by his father Earl almost literally right out of the crib he was destined to make a name for himself. At 8 years old he scored 80 for the first time, by the time he was 12 he broke 70. In 1991, Tiger became the  U.S. Junior Amateur Champion and won a handful of awards along the way. Just one year later he was facing off with the best in the world. He stepped on the course at the Riviera Country Club in L.A.a kid, when most kids are thinking about getting their drivers license for the first time here he was driving the ball off the tee against the best players in the world. In his first round he shot a 72 then in the second round he shot a 75, he missed the cut by just 6 shots. It was a respectable performance and the best was yet to come. The picture to the right is a young Tiger Woods teeing off for the first time on the PGA Tour. 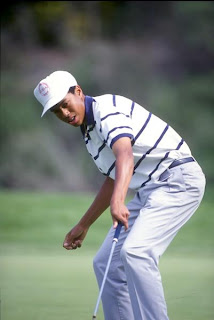 Tiger won The Junior Championship title 2 more times, he is the only golfer to win the title 3 times. After graduating from high school he attended Stanford and had continued success. In 1995, he became the youngest player to ever compete in The Masters.  By the age of 20, Tiger became the first golfer to win 3 consecutive U.S. Amateur titles. In 1996, he left Stanford after 2 years to turn pro. He immediately  landed huge sponsorship deals and was on his way to becoming a household name. In 1997, he won The Masters, becoming the youngest player ever to win the tournament. Just two months later he was ranked the #1 golfer in the world, no other golfer had reached the ranking as quickly as Tiger did. In 2000, he won The Masters, The U.S. Open, The British Open, and the PGA Championship making him the youngest player to achieve the Career Grand Slam. At that point he was definitely a household name and everyone in the world knew who Tiger Woods was. He continued his winning ways for a number of years, becoming one of the best known athletes in the world of sports.

Since that day in Los Angeles, Tiger Woods has won  75 PGA events, which is second behind Sam Snead's 82, he has also won 14 Major Championships, only 4 behind the great Jack Niklaus. The 10 time PGA Player of the Year has had some injuries hamper him as well as his share of controversy later in his career, it has definitely cast a shadow on one of the best golfers the world has ever seen. I realize that as humans we all make mistakes and Tiger surely made his, the difference between me and him is when I make a mistake TMZ isn't waiting on my doorstep to exploit it.He is by far the greatest golfer of this generation and hopefully I get to talk about how he surpasses Snead's and Niklaus' records sometime in the future. He has had a couple down years by his standards but he is a winner and winning is what I believe he will do.

Posted by Wade Forrester at 4:25 AM