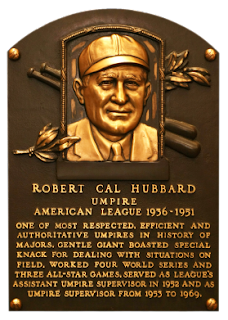 Born in the small town of  Keyetsville, Missouri, Hubbard went to a school that only had 30 students. He would attend high school in a neighboring town because Keyetsville didn't have a football team. After graduating high school he attended Chillicothe Business College. In 1922 he met Bo McMillan who was an All American quarterback and the coach of Centenary College in Shreveport, Louisiana. McMillan convinced the 6' 4 " tower of a man to join his team and he was a star tackle there from 1922 to 1924. When McMillan took a job with Geneva College in Beaver Falls, Pennsylvania Hubbard followed the coach. Due to eligibility rules Hubbard was forced to sit out a year but returned in 1926 and helped Geneva win a historic game against Harvard that year. Hubbard came from the era that players would play both sides of the ball on the offensive line he was one of the most dominant men to play the game and on defense he helped revolutionize the sport as he played the defensive tackle position more like the modern day linebacker, so in a lot of ways Hubbard had a hand in inventing the linebacker position.

He started his professional football career in 1927 as a member of the New York Giants and in his rookie year he helped them win a Championship. After the Giants played the Packers in Green Bay in 1928 Hubbard asked to be traded to the Packers citing that he didn't care for big cities and he thought he was much better suited to play in a smaller city like Green Bay. The Giants granted him his wish and traded him to the Packers. He thrived as a member of the Packers, as the team won three Championships in his first three years with the team.  Hubbard played from 1929 to 1935 in Green Bay then retired temporarily only to be convinced to come back to play for the Giants in 1936. Hubbard thought he was just going to fill in a little in one game but ended up playing six before he hung up his cleats for good. When it was all said and done for the football career he had nine years under his belt and many thought he was one of the bet of his time, in fact the legendary George Halas the head coach of his longtime rival Chicago Bears called him "the best lineman" in the game. 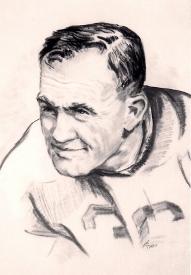 In his early years in the NFL, Hubbard started umpiring minor league ballgames during the offseason to make a little extra money while he waited for the football season to return. Following his retirement from the NFL in 1936 he was called up to umpire games in the American League. Hubbard spent 16 years and was considered to be one of the best umpires in the game who was well respected by players. Hubbard umpired 4 World Series  and 3 All Star games in those 16 years. In 1951, Hubbard was on a hunting trip when a he caught some shrapnel in his eye from one of his fellow hunters guns, the injury caused permanent eye damage  and forced him to relinquish his duties as an American League umpire. It was said that the injury devastated Hubbard but his time in Major League Baseball was far from over.After a short stint as the Assistant Supervisor of League Umpires he took on the the Head Supervisor role and held that position from 1953 to 1969.  Looking back on his career Hubbard once said "I'm just a big ole country boy who hated to sit on the sidelines. I wanted to be in the middle of the action." What Hubbard was is a big ole country boy that led a pretty remarkable life. He was elected to the College Football Hall of Fame in 1962 then  the Professional Football hall of Fame in 1963 before receiving his final Hall of Fame honors from baseball in 1976. Hubbard would pass away late in 1977 but will truly live forever as the only person to have his name enshrined into three different major sports halls of fame.
Posted by Wade Forrester at 12:17 PM