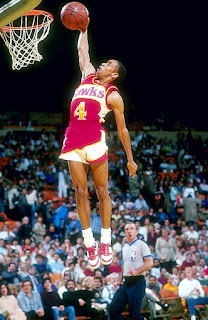 On February 8, 1986, one of the shortest players in the history of the NBA Spud Webb won the NBA Slam Dunk competition. Standing at just 5' 7", Webb beat his Atlanta Hawks teammate Dominique Wilkins who stood 6' 8". Webb absolutely dazzled the crowd in Dallas as he showed off his leaping ability on the way to winning the competition.

Webb, a native of Dallas Texas used basketball as an outlet from an early age. Despite his size he showed he had the skills to succeed at the sport. In high school he didn't get much playing time until his senior year, but he did learn to dunk in his junior year. His size kept him off the radar of most Division I schools, so he decided to attend Midland Junior College in his home state of Texas. That team went all the way to the Junior College Championship in 1982. Webb led the team in scoring in the Championship game and it caught the eye of an assistant coach from North Carolina State named Tom Abatemarco. After a meeting was arranged with Jim Valvano, Webb was offered a scholarship to N.C. State. In his two years at the school he averaged 10.4 points per game and 5.7 assists per game. 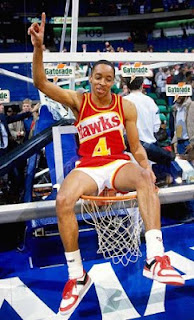 In 1985, Webb was drafted by the Detroit Pistons, after not making the club, he caught on with the Atlanta Hawks. He spent his first six seasons with the Hawks. In 1991 he moved onto the Sacramento Kings where he had his best years, on the stat sheet. He played with the Kings until the end of the '94-'95 season. In the '95-'96 campaign he returned to the Hawks, then finished the season with the Minnesota Timberwolves. The following season he joined the Orlando Magic, he only played 4 games with the Magic before being released in March of 1998. Webb played 814 games in his NBA career, scoring more than 8,000 points in 12 seasons.

His participation in the Slam Dunk competition surprised his teammate Dominique Wilkins who beat Michael Jordan in the contest the year before. Wilkins said he had never seen Webb dunk before and he was in for a show. Webb dazzled the crowd and his peers as he put on a show that included: the elevator two handed double pump dunk, the one handed off the backboard jam, a 360 helicopter dunk, a reverse double pump slam, a 180 degree reverse double pump slam, and last but not least a 180 degree reverse strawberry jam from a lob bounce off the floor. By hitting a perfect score in the final round of the competition, Webb took home the prize. He proved that you don't have to be a giant to do a giants job.