February 9, 1976: Negro Leaguer Oscar Charleston is selected to the Baseball Hall of Fame

On February 9, 1976, a special committee on Negro League Baseball selected Oscar Charleston to be enshrined into the Baseball Hall of Fame. Charleston is considered to be one of the best hitters in the history of the Negro Leagues. Buck O'Neil once said Charleston was Ty Cobb, Babe Ruth, and Tris Speaker all rolled into one.  Described as a barrel chested, left handed hitter, who could hit for both power and average. His blazing speed not only made him one of the best defensive players of his time it also made him a constant threat to steal a base. 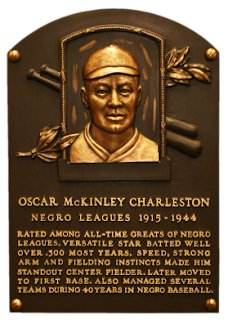 In 1912, Charleston joined the U.S. Army, he was only 15 years old. While serving in the Philippines, Charleston honed his baseball skills as the only African American player in the Manila league. After he was discharged Charleston joined the Indianapolis ABC's, a team that Charleston served as a bat boy for, in his youth. Charleston was considered a milder mannered person, he did not drink or smoke, but when he stepped on the baseball field he was one of the fiercest competitors to ever play the game. His temper was almost as famous as his play. He was suspended for fighting with a white umpire his rookie season, he had an incident where he yanked the hood of a member of the Ku Klux Klan who was taunting him after a game, and he took on an entire group of Cuban Soldiers after a game in Cuba. The fiery player had his moments with his temper but his aggression was best used in the batters box. 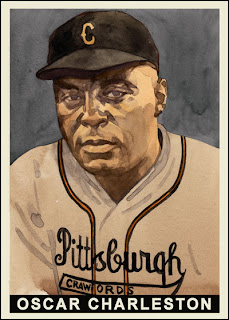 His career was scattered between ten teams. Everywhere he went he knocked the cover off the ball, while showing off his defensive skills in the outfield. Throughout his entire career Charleston was often a player/manager. As Father Time caught up with him he lost the speed it took to play center field and moved to first base. The one thing he didn't lose was the ability to kill the baseball. In 1932, Charleston took on the player/manager role with the Pittsburgh Crawfords. Featuring future Hall of Famers Josh Gibson, Satchel Paige, and Judy Johnson, the Crawfords might have been the best Negro League squad ever assembled. Many of  Charleston's peers considered him the best they had ever seen, he could do it all.

His career was remarkable. His playing days ended in 1941, however he was involved in the sport of baseball until he passed away in 1954. With Charleston being recognized in Hall of Fame he will forever be remembered.  Like many of the great Negro League players the information regarding Charleston is scarce, it is unfortunate. While accurate information is hard to come by there is one thing that I know to be accurate, he was one of the best and he has a plaque in Cooperstown because of it. I often think about how great it would have been to see some of the men from the past perform in their prime, you can just look at Charleston's numbers and know it would have been fun to watch him play.

A video that tells about the life and times of Oscar Charleston:
http://youtu.be/ZwUK1wfoqUQ

Mark Chiarello painted the last picture you can check out more of his work here:
http://markchiarello.com/