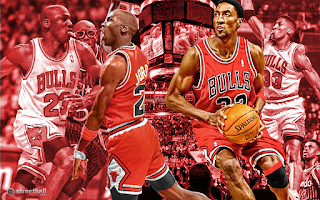 On February 18, 1996, at Market Square Arena in Indiana, Michael Jordan and Scottie Pippen of the Chicago Bulls became just the ninth set of teammates to score 40 points in the same game, Jordan scored 44 and Pippen knocked down 40. They reached this milestone in a 110-102 win over the Pacers. The Pacers had beaten the Bulls 103-97 earlier in the season at home and were trying to add to 3 wins in a row over the Chicago team in their home arena. Despite having 5 players in double figures they could not stop the Jordan and Pippen show. 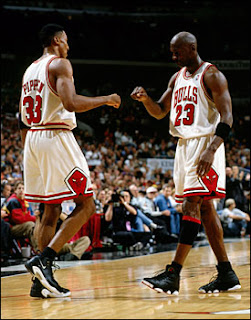 The Pacers were able to stay very close to the Bulls on the scoreboard throughout the entire contest, at the half the teams were only separated by two points with Chicago leading 53-51. In the second half Pippen caught fire, he drained 29 of his 40 points. With a little more than 8 minutes to go in the game the Pacers were able to get within one point before Chicago rang off 8 straight points, 5 by Pippen and 3 by Jordan. The 107-95 score gave the Bulls their biggest lead of the game with just 1 minute and 54 seconds to go. The Pacers tried to even things up to no avail and the Bulls took home a winner. It was a statement game for Chicago, they wanted the Indiana team to know they could win in their house and Jordan and Pippen made that statement loud and clear.

It was the 5th win in a row for the Bulls and it brought their record to 46-5. They went onto post a 72-10 regular season record before grabbing their 4th NBA Championship Title. Pippen and Jordan forged one of the best duos of all time, they won a grand total of 6 Championships together with the Bulls. Simply put they were great and I'm glad I got to witness that greatness with my own eyes.
Posted by Wade Forrester at 9:00 AM