October 1, 1978: Gaylord Perry Records His 3,000th K after Ozzie Smith Does the First Backflip of His Career 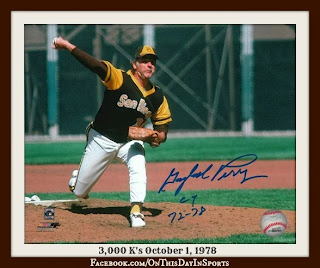 On October 1, 1978, San Diego Padres hurler Gaylord Perry became just the third pitcher in the history of Major League Baseball to reach 3,000 strikeouts in his career.  The 40 year-old Perry reached the milestone in a 4-3 win over N.L. West Champion Dodgers on the last day of the regular season at Qualcomm Stadium in San Diego.  Perry reached the magic number with a strikeout of outfielder Joe Simpson in the eighth, then added another one to his resume with another strikeout of Simpson in the tenth it was his 10th K of the day and the 3001st of his career. Rollie Fingers took over in the eleventh before Oscar Gamble won it for the Padres with a walkoff single in the bottom of the frame. Before his Hall of Fame career came to a close, Perry had recorded 3,534 strikeouts, he currently sits 8th on the all-time list. Before that game, shortstop Ozzie Smith did his first ever backflip in front of the fans in San Diego. It was fan appreciation day at the ballpark and the promotions director of the club knew Ozzie could do them so he asked if he could do one before the game and The Wizard obliged. It proved to be something that the crowd loved and it would become a trademark for the 23 year-old rookie. After Ozzie was traded to the Cardinals in the Winter of '81, the backflip became an Opening Day tradition at Busch Stadium in St. Louis. As a native St. Louisan, watching Ozzie do that flip is one of my earliest memories of watching baseball. I think it's pretty neat he did it on the same day that another legend reached a milestone that most pitchers can only dream of.

Check out the box score: http://www.baseball-reference.com/boxes/SDN/SDN197810010.shtml
Posted by Wade Forrester at 12:21 AM