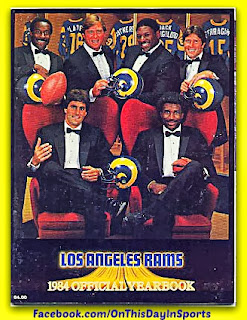 On September 30, 1984, at the Coliseum in L.A. the Los Angeles Rams set an NFL record by scoring three safeties in a 33-12 win over the New York Giants. Things weren't looking good for the Rams from the start, they fumbled the opening kickoff and it was picked up by Phil McConkey who took it in for a quick score, the Giants failed to convert the extra point which was just the beginning of a long list of problems they would experience in this one. One of the biggest highlights of the second quarter was an 83 yard punt return by Henry Ellard that gave the Rams a 14-6 advantage.  By the end of the second they were up 17-6 and there was no looking back. The three safeties all came in the third, the first one came on a blocked punt by Ivory Sully that went out of the back of the endzone, the second came when Jack Youngblood and Reggie Doss dragged down Phil Simms in the endzone, and the third came on another blocked punt in the endzone, this time it was Norwood Vann getting in on the action. The Giants added 6 more points to the board with a touchdown in the fourth but at that point they were beaten. The three safeties in a game is not only a record for a single team in one game it's the most recorded by both teams in a game. As I dug into this one I was a little surprised that it hasn't been broken.