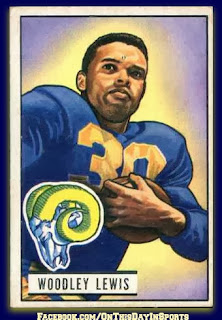 On October 18, 1953, Woodley Lewis of the Los Angeles Rams totaled 120 yards in punt returns and 174 yards in kick returns during a 31-19 win over the Lions in Detroit. The special teamer shared the spotlight with his quarterback Norm Van Brocklin who hit touchdown passes of 40 and 45 yards to lead the Rams to the victory. The Rams took the lead in their first series of plays after Van Brocklin capped off an eight play 65 yard drive that was finished off by Tank Younger who slammed it in at the one. Just 15 seconds into the second quarter it looked like the Lions had tied it up when Bobby Layne hit Leon Hart for a touchdown only to have the extra point blocked. Minutes later Van Brocklin dropped a 40 yard bomb right into the hands of Elroy Hirsch who was crossing the goal line the moment it landed in his grasp. The two teams traded field goals before the half and the Rams led 17-9 as two the teams headed to their locker rooms. The biggest run of the day for Lewis came in the third quarter when he took a punt 78 yards for a score that gave his team a 24-9 lead. The Lions closed the gap quickly by scoring 10 points before the third quarter was over and suddenly that 24-9 lead had shrank to 24-19. The seasoned veteran Van Brocklin put the icing on the Rams cake when he hit Bob Boyd for a 45 yard score in the fourth. The day by Lewis was remarkable. Unfortunately where he stands on the all time list for return yards in a game is hard to say, I could only find a list of "all time" leaders that began in 1960, 7 years after the day Lewis ran all over the Lions special teams unit. If his day was recognized on that list he would sit in sixth place with his 294 return yards. The all time leader is Tyrone Hughes, the former New Orleans Saint combined for 347 return yards in a game against the Rams in 1994.