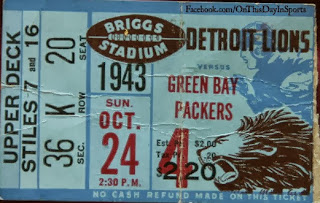 On October 24, 1943,  in a game in a 27-6 win over the Lions at Briggs Stadium in Detroit, the Green Bay Packers intercepted a total of 9 passes to set an NFL record for most interceptions by one team in a single game. The Packers came into the game looking to bounce back from a rough loss against Washington and it was something that would do in a big way. Early on the running game stalled for Green Bay so they went to the air with devastating results. Rookie quarterback Irving Comp connected on 14 of 18 passes thrown for 201 yards and the Packers totaled 326 passing yards on 21 total completions before the game was over. Don Hutson scored a total of 12 points, he caught one touchdown, booted three extra points and kicked a field goal. The Lions attempted to match the aerial attack only to have it backfire, their starter Frank Sinkwich started off well by connecting on a four yard touchdown pass in the first quarter but that was the only highlight he would probably want to remember after this one ended. Sinkwich threw a total of 7 interceptions before his backup took over and proceeded to toss two more. Two of the nine interceptions were made by Hutson who did just about everything that day. To date, only two teams have intercepted 9 passes in one game, the Packers were the first to achieve the feat, then 22 years later the Philadelphia Eagles intercepted 9 passes in a game against the Pittsburgh Steelers.