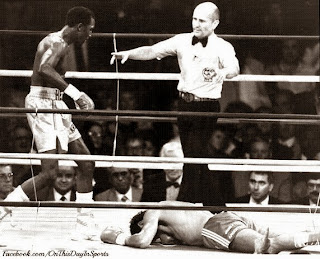 On October 29, 1987, at the Hilton in Las Vegas, Nevada, Thomas "The Hit Man" Hearns became the first boxer to win titles in four different weight categories by knocking out Argentinean boxer Juan Roldan in the fourth round of a bout that had the World Boxing Council's Middleweight Title on the line. The title had been vacated by Sugar Ray Leonard  in April of that year and this fight would crown a new champ. The fight was far from an easy one for Hearns. Roldan came out of the gate like a man possessed, he went after his opponent with a fury of wild punches that forced Hearns into evasive maneuvers as he threw everything he had at him. The big problem with Roland's approach was that it was so wild that Hearns wasn't taking any major blows as much as he was just avoiding the fury while trying to land a clean blow. The first clean one that Hearns landed sent Roldan crashing down, however, he wasn't done. The Argentinean came back with same fire that he had before he went down and once again Hearns was just trying to land a punch while enduring everything that Roldan had. Then right as the bell rang at the end of the first Hearns sent him down again. The stunned Roldan barely got up and even after he recovered he looked like he might not know where the hell he was. When the second round began Roldan looked like he hardly had his legs under him, but he did show that he still had a fire under his ass and continued to throw wild punch after wild punch until Hearns put him on the canvas again. After that knockdown it became a dance, with  Roldan throwing wildly, and Hearns dancing around them while connecting with key blows as he was taking control of the fight, or so it looked. Roldan came out in the third and rocked Hearns, while the punches were still a bit wild, he was landing punches that had clearly done damage on his way to winning the round. Seconds into the fourth, Roldan landed a left hook that buckled Hearn's legs, nearly sending him down for the first time. Hearns acknowledged after the fight that he knew he was hurt and he knew he just had to hold on to get through the bout. Finally, minutes later Hearns connected with two brutal rights that turned out Roland's lights. It was a wild and crazy one from start to finish. Following the fight, the 29 year old Hearns said "I'm a very proud young man right now," after acknowledging that he had set the goal of four titles seven years earlier. Before winning the middleweight title, Hearns had held the welterweight, super welterweight, and light heavyweight championship titles.

If you have twenty minutes to spare watch this wild one here: http://www.youtube.com/watch?v=CHKs19WZjQk
Posted by Wade Forrester at 12:35 AM