October 11, 1980: Pete Rose and The Phillies Bowl Over The Astros 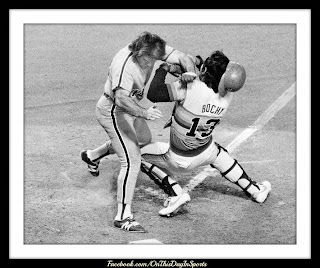 On October 11, 1980, in Game 4 of the NLCS at the Astrodome in Houston,Philadelphia Phillies first baseman Pete Rose scored the winning run in the tenth inning by bowling over the Astros catcher Bruce Bochy in the tenth inning to give his club a 4-3 lead. One batter later Manny Trillo smacked an RBI double that gave the Phillies a little insurance and would prove to be the final run in the 5-3 Philadelphia win that evened the Best of 5 series at two apiece. The game was full of controversy, in the fourth the Phillies led the inning off with back-to-back singles by Bake McBride and Manny Trillo. The next batter, Garry Maddox, hit a soft liner right to the Houston pitcher Vern Ruhle who quickly doubled off McBride at first. Within moments of the double play a number of Philadelphia players came out of the dugout insisting that Ruhle had trapped the ball, as the confusion mounted the Astros first baseman, Art Howe ran and tagged second base claiming that it was a triple play. The umpires debated for more than 20 minutes before they stood behind their original ruling. After the long delay the Phillies failed to score even though the controversial call went their way. The Houston club scored a run in the fourth and another in the fifth, before Philadelphia struck for three runs in the eighth to take a 3-2 lead. The Astros tied the ballgame in the ninth on an RBI single by Terry Puhl which set up an exciting extra innings finish. Unfortunately for the 44,952 fans in the Astrodome it wasn't the exciting finish they were hoping to see. Rose got on base in the tenth with a one out single off of Joe Sambito, the Houston pitcher retired Mike Schmidt before pinch hitter Greg Lucinski lashed a double into left. Rose came wheeling around the bases and eliminated any play at the plate by running over the Houston catcher. While they scored another run following the run scored by Rose it would be all the Philadelphia club needed for victory as Tug McGraw retired the side in order to secure the series tying victory. One day later the Phillies would win another battle that would go into extra innings before they prevailed 8-7, they went onto the World Series where they took on the Kansas City Royals, they took the title in 6 games.

Check out the box score: http://www.baseball-reference.com/boxes/HOU/HOU198010110.shtml