October 19, 1936: The First Ever College Football Poll From The Associated Press 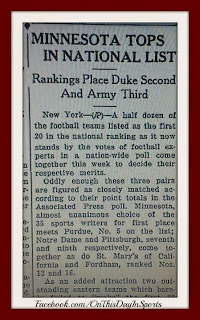 On October 19, 1936, the first ever Associated Press College Football poll was released with the University of Minnesota sitting at #1 with 32 of the 35 first place votes. The poll was the brainchild of Alan J. Gould, a sports editor for the AP. Later in his life Gould would say "It was a case of thinking up ideas to develop interest and controversy between football Saturdays." He went onto say "Papers wanted material to fill space between games. Sports then was living off of controversy, opinion, whatever. That's all I had in mind, something to keep the pot boiling. This was just another exercise in hoopla." What Gould didn't realize at the time was that the poll would become a part of the fabric of college football. His intentions were fulfilled as it not only took up space between game days, there would be many debates around the water cooler about the rankings. The poll consisted of 20 teams from 1936 to 1961, from 1962 to 1967 they ranked just 10 teams, then reverted back to the 20 teams rankings in 1968. The poll was expanded to the 25 that we all are used to today in 1989. That pot that Gould wanted to boil is still boiling more than 70 years later. Minnesota would hold onto the top spot and be named National Champions despite the fact that as a Big 10 school they were not allowed to play in a Bowl game. It was the third consecutive National Championship for the Golden Gophers. There were issues with the Gophers claiming the crown, some considered Pittsburgh the rightful owner after they finished the season ranked #3 then blanked Washington 21-0 in the Rose Bowl. The #2 team, LSU was upset by the Santa Clara Broncos in the Sugar Bowl and many people around the country considered Pittsburgh the Champions since Minnesota did not play a Bowl game. I can't help but find it a little funny that even today there is always controversy when it comes to those rankings.

Posted by Wade Forrester at 1:07 AM