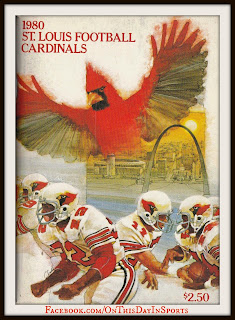 On October 26, 1980, in a game against the Colts in Baltimore the St. Louis Cardinals tied an NFL record by sacking the Baltimore signal caller Bert Jones 12 times on the way to a 17-10 win. The Cardinals were in desperate need of a win after getting beat 23-0 by the Washington Redskins the week before the game in Baltimore. The quarterback of the Cardinals, Jim Hart had been sacked 6 times in the contest against Washington, but on this day he would only be sacked twice while his defense came out and wreaked havoc on Bert Jones and the Colts. Ottis Anderson put the the Gridbirds on the board with a 4 yard blast into the endzone in the first quarter which was all the scoring that would take place in the first half. In the third, Pat Tilley caught a 10 yard strike from Hart that gave the Cardinals a 2 touchdown advantage. They added 3 more points to the board before the quarter was over and had a commanding 17-0 lead as they headed into the final quarter. While the 17-10 score makes it look like it was a close one the Colts touchdown came with just two seconds to go in the game. The Cardinals defense was led by defensive end Curtis Greer, he recorded 4.5 sacks on the day. It was just the second time in NFL history that one team had recorded 12 sacks in one game, the first to complete the feat was the Dallas Cowboys who had a 12 sack day against the Pittsburgh Steelers in November of 1966. It has been done a total of 5 times, the '84 Bears recorded 12 sacks in a game against the Lions, the '85 Cowboys recorded 12 sacks against the Oilers, and most recently the 2007 Giants recorded 12 against the Eagles. It's safe to say someone woke up sore the next day after each of those games.