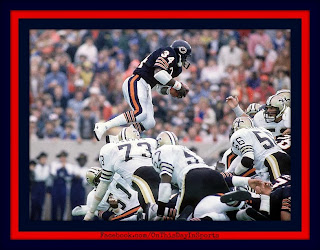 On October 7, 1984, in a 20-7 victory over the New Orleans Saints at Soldier Field in Chicago, Bears legend Walter Payton became the all time rushing leader. Payton surpassed another legend by the name of Jim Brown. Brown ran for 12,312 yards for the Cleveland Browns in a career that lasted from 1957 to 1965. At the beginning of the day Payton needed 67 yards to become the all-time leader, he reached the mark with a six yard run just 57 seconds into the third quarter. The game was stopped briefly as Payton held up the ball, he then handed it over to Pete Elliott, the executive director of the Pro Football Hall of Fame. The fans in the stands gave Payton a long ovation and the Saints players participated in the ovation as they had just witnessed a truly historic moment. Payton finished the day with a 154 yards on the ground, it was his 59th game in a row with at least a 100 yards rushing, which also broke another record that he had shared with Brown going into the day. Payton said he was relieved that the pursuit of the record was over, it seems like a lot of athletes that are on the brink of their biggest milestones just want to get it done so they can just play their respective sport. Payton would run the rock until 1987, he finished with 16,726 rushing yards which was good for #1 on the list until  Emmitt Smith surpassed it in 2002. Smith finished his career with 18,355 rushing yards. Although Payton's record was broken he is and always will be considered one of the greatest running backs the game of football has ever seen, in my opinion he was the greatest.