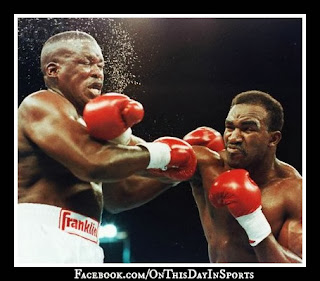 On October 25, 1990, Evander Holyfield took the heavyweight title from Buster Douglas with a third round knockout at The Mirage in Las Vegas. The 30 year old Douglas stunned the world in February of that same year by taking the title from Iron Mike Tyson. Douglas didn't look even close to the fighter that had beat Tyson, instead he looked overweight and was hardly a formidable challenger for Holyfield. The blow that ended it all in the third was a powerful right to the jaw that sent Douglas to the canvas. Douglas insisted that there was no way he could get back up after the blow but many questioned him and his desire to be a true champion. The loss dropped Douglas to 30-5-1 while Holyfield recorded his 25th straight victory and was the new Heavyweight Champion of the World. The fight posters billed it as "The Moment of Truth" the truth was Douglas was a one hit wonder. However, he cashed in to the tune of $24.6 million, he would later say that he walked away with $1.5 million after taxes and everyone else stuck their hand in the pot. Still not a bad payout for getting his ass kicked. I know I would let anyone of you knock me out for a cool million.

Watch the fight here: http://www.youtube.com/watch?v=siheWCzIL90 if you fast forward to the 13:25 mark you can watch the blow that sent Douglas crashing down.
Posted by Wade Forrester at 10:34 AM