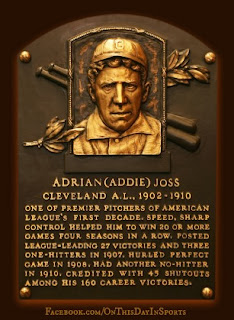 On October 2, 1908, in one of the greatest pitching duels of the twentieth century, Cleveland Naps hurler Addie Joss became just the second pitcher in the modern era to record a perfect game with a 1-0 win over the Chicago White Sox at League Park in Cleveland. The Naps were in the middle of a heated pennant race with the White Sox and Detroit Tigers and the Chicago club was looking to gain some ground as there were just a handful of games to go in the regular season. Chicago sent Big Ed Walsh to the hill while Cleveland countered with Joss. The two pitchers put on a show that all 10,598 on hand would not soon forget. Walsh was going for his 40th win of the season and he was in dominant form as he gave up just four hits and struck out 15 men while giving up just one run, albeit an unearned run. The lone run of the contest came in the third inning, after Joe Birmingham led off the inning with a single, Walsh caught him napping at first and looked to have him picked off, as Birmingham broke for second in an attempt to avoid being tagged out, first baseman Frank Isbell tried to throw the the ball to second, instead he hit Birmingham in the head. Instead of it being the sure out, Birmingham was standing on third base after the mishap. The runner scored after Walsh and his catcher got crossed up and the ball got past the backstop, all the way to the wall while Birmingham scampered home. Joss didn't have the same dominance with the strikeout, in fact he only set down  three men via the K. However, he was masterful with his control and had some spectacular defense behind him. Lajoie made two phenomenal grabs at second that kept the perfecto intact. The player/manager of the White Sox, Fielder Jones threw everything he had at Joss in the ninth as he used three pinch hitters in the inning. After he retired the first two then John Anderson was the last Chicago hope, he shot a ball down the line that would have resulted in a double if it wouldn't have went foul, then he shot one right to the third baseman Bill Bradley. Initially, Bradley bobbled the ball before gunning it over to third where George Stovall picked it out of the dirt for the 27th out. Joss needed just 74 pitches to achieve perfection, it is the lowest amount of pitches ever thrown in a perfect game. The battle between the two future hall of famers was one for the ages. The fans in Cleveland came pouring onto the field to congratulate the pitcher as they had just witnessed history be made. To date, only 23 men have achieved perfection. Cy Young was the first man in the modern era to complete the feat just four years before Joss added his name to the elite list of men.