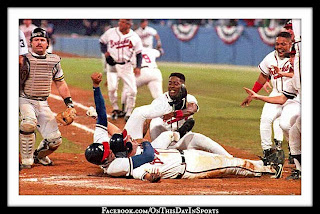 On October 14, 1992, at Fulton County Stadium in Atlanta, the Braves punched a ticket to the Fall Classic with a stunning 3 run rally against the Pittsburgh Pirates in Game 7 of the NLCS.  The Pirates came into the inning trying to hold onto a 2-0 lead and were just three outs away from making their first World Series appearance since 1979. Then it all fell apart for the Buccos. Their starting pitcher, Doug Drabek had pitched a gem, he was on just three days rest but had held the Braves off until that fateful ninth inning. Drabek gave up a leadoff double to Terry Pendleton, when Pendleton walked to the dish he was just 1 for 21 in the series. He then came up with the hit that began a historic rally. The next man up, David Justice hit a routine grounder to second only to have the normally sure handed second baseman Jose Lind boot the ball and suddenly the Braves had Pendleton standing 90 feet away from scoring while Justice was standing at first on the error charged to Lind. Drabek walked Sid Bream to load the bases before Jim Leyland called on Stan Belinda to put the fire out, it was a fire that Belinda couldn't contain. The first man Belinda faced was Ron Gant, he nearly won it with a long drive that was caught just two feet from the wall by Barry Bonds. It was a long productive out by Gant as Pendleton scored on the sacrifice. After retiring pinch hitter Brian Hunter for the second out of the inning, Belinda reloaded the bases with a walk to Damon Berryhill. Belinda needed just one out  to send his Pirates to the World Series, Bobby Cox called on Francisco Cabrera to pinch hit for his pitcher Jeff Reardon with it all on the line. Cabrera, a backup catcher, had just three hits during the regular season, he had homered against Belinda the last time he had faced him but this time all he needed to do was deliver a single to keep hopes alive in Atlanta and he did just that. Cabrera shot a ball between third and short that brought Justice into score the tying run while Bream came in behind him to score the game winner. Cabrera's shot to left was handled by Bonds and he attempted to gun the runner down only to have the throw sail just a bit wide of the dish, Bream was known as the team's slowest runner but that didn't stop him from avoiding Mike Lavalliere's tag as he came sliding in. It was truly one of the most exciting finished in NLCS history. Unfortunately for the fans of the Pittsburgh Pirates it proved to be the last time they would reach the playoffs until they finally got that monkey of their back this season. I know that the play at the plate with Bream has been talked about a lot since they finally did make a postseason appearance this year. I do understand why everyone brings up Bream's name when they think of that game because it is the last thing they seen, but I look at this one as a true team win for that Atlanta Braves club. They came together with their backs against the wall and pulled off a very memorable win that led to a second consecutive World Series appearance.

Here's the box score: http://www.baseball-reference.com/boxes/ATL/ATL199210140.shtml
Posted by Wade Forrester at 2:55 AM