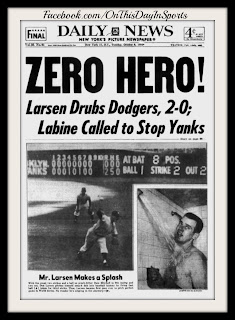 On October 8, 1956, in a 2-0 win over the Brooklyn Dodgers in Game 5 of the Fall Classic, Don Larsen of the New York Yankees pitched the only perfect game in World Series history. The historic performance by Larsen was witnessed by more than 64,000 fans at Yankee Stadium in the Bronx. The 27 year old used an unusual no windup delivery that proved to be more than effective. The Dodgers had Sal Maglie on the bump for them and he had a pretty decent day himself, he matched Larsen pitch for pitch until Mickey Mantle blasted a fourth inning home run. From that point on it was all about Don Larsen. He kept mowing through the order, three up three down in each and every inning. The key defensive play of the ballgame was a spectacular running grab by Mantle in the fifth. Hank Bauer added to the Yankees lead with an RBI in the sixth which didn't really matter as Larsen was on his way to perfection. When he entered the ninth and final inning Larsen had six strikeouts under his belt and was just three outs away from making history. He quickly retired Carl Furillo on a flyball, then set Roy Campanella down on a groundout. He needed one out to accomplish the feat, the Dodgers skipper, Walter Alston sent pinch hitter Dale Mitchell to the plate to hit for his pitcher Maglie. Mitchell, a career.312 hitter would not spoil the bid for perfection as he fell behind 1-2 before Larsen fired his 97th pitch right past him for a called third strike. To date, Larsen is the only man to throw a perfect game/no-hitter in the World Series and until 2010 he was the only man to throw a no-hitter in the postseason, Roy Halladay of the Phillies no-hit the Reds in the 2010 NLDS. The performance by Larsen is perhaps the greatest World Series game ever pitched. It gave his Yankees a 3-2 edge in the series only to have the Dodgers even things up the next day with a 1-0 victory at Ebbets Field that forced a Game 7. The Yankees took the title with a 9-0 thrashing one day after the Game 6 letdown, it was their 17th World Championship and Larsen was named MVP of the series for his spectacular Game 5 performance.

Check out this great video about Larsen's Perfect Game: http://wapc.mlb.com/play?content_id=3295361