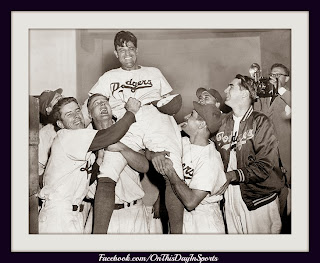 On October 3, 1947, in Game 4 of the World Series at Ebbets Field in Brooklyn, New York, Dodgers pinch hitter Cookie Lavagetto broke up Bill Bevens no-hitter with two on and two out in the ninth inning with a walk off double that gave his Dodgers a 3-2 victory over the Yankees. The unlikely win tied the series at 2. While Bevens didn't allow a hit he walked nine guys in the contest, which cost him a run in the fifth, after walking two men to leadoff the inning a sacrifice put a man at third that Pee Wee Reese knocked in with a groundout. The no-no was still intact but the Dodgers had cut the lead to 2-1. Bevens remained erratic but it didn't amount to much as the ninth rolled around he was on the brink of becoming the first man in the history of the game to throw a no-hitter in the World Series. He took care of the first batter, Bruce Edwards  with a flyball to left, then he walked Carl Furillo. Bevens was able to get Spider Jorgenson to foul out before he issued an intentional walk to Paul Reiser. The Dodgers skipper Burt Shotton made all the right moves as he called in pinch runners to run for both base runners, then he made the call for Lavagetto to pinch hit for Eddie Stanky. The move even surprised Lavagetto, when he first heard his manager call his name he assumed he was going into pinch run, in fact he started to run toward first base then his manager yelled at him and told him he was going to hit for Stanky. On the second pitch, Lavagetto swung late and hit a drive to the right field wall bringing in both runners for the Dodgers victory. One of the greatest things about sports is how you never know what will happen next and who will be the hero, there is a good chance it might be a name you would not think of, especially in the postseason. Lavagetto spent 10 years in the majors, he lost four seasons while he was in his prime as he served his country during World War II. The career .269 hitter made four consecutive all star appearances from '38 to '41 before he left for the service. When he returned to baseball in '46 he was not the same player he was before he left. For the most part Lavagetto became a bench guy, he appeared in just 67 games in '46, and only 18 games during the regular season in '47. Even though the Yankees would take the series in seven games, that one swing of the bat cemented Lavagetto's name into World Series history, it was the last hit of his career.

Check out the box score: http://www.baseball-reference.com/boxes/BRO/BRO194710030.shtml
Posted by Wade Forrester at 12:19 AM