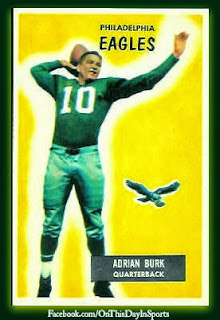 On October 17, 1954, Philadelphia Eagles quarterback Adrian Burk tied the record for most touchdown passes in a game with 7 in a 49-21 victory over the Redskins in Washington. Burk fired his record tying touchdown to Pete Pihos with just ten seconds left in the game. Pihos along with Bobby Walston hauled in three of touchdown passes apiece while Tony Ledbetter caught one. At the end of the day Burk completed 19 of 27  for 229 yards and the 7 touchdowns. The Redskins fans did get to cheer about something that day, in the third quarter Dale Atkeson took a kickoff return 99 yards for a touchdown, it set a franchise record in the losing effort. Burk did more than win the game with his arm, he was also the team's punter and he did a masterful job by pinning the Redskins at the 2,3, and the 9 which made it a rough go for the Washington offense. The win by the Eagles moved them to 4-0 while the Redskins were in search of their first win of the '54 season. Burk spent 7 years in the NFL, the '54 season was something special for him as he led the league with 23 touchdown passes, pretty crazy that almost a third of those came in one game. Unfortunately for him and the Eagles they were able to maintain the early season dominance and they went onto finish in second place in the Eastern Division with a 7-4-1 record. However that game in Washington earned Burk a spot on a very elite list, he was just the second player in NFL history to accomplish the feat, Sid Luckman of the Chicago Bears was the first, he had a 7 touchdown pass day in 1943. To date, Burk is one of six men to accomplish the feat, the latest person to do it was Peyton Manning as he kicked off the 2013 season with a 7 touchdown pass day.

Posted by Wade Forrester at 1:10 AM