October 9, 1983: Joe Ferguson and The Bills Win a Shootout In Miami 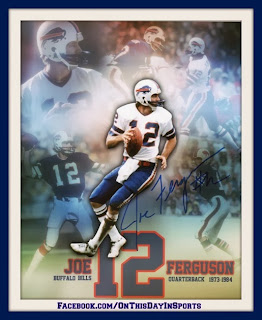 On October 9, 1983, Buffalo Bills quarterback Joe Ferguson out dueled Dan Marino in a 38-35 overtime victory over the Dolphins at the Orange Bowl in Miami. Less than a week before Ferguson was removed from a Monday night contest against the Jets after receiving a concussion, the Bills lost that game 34-10 and were in need of a bounce back performance. That's exactly what they got from Ferguson. he showed no signs of the concussion as he hit 33 of his 55 passes thrown, at the end of the day Ferguson had connected with 5 touchdown passes and had 419 yards through the air. The rookie quarterback for the Dolphins was impressive as well, he hooked went 19 for 29 with 322 yards, 3 touchdowns through the air, while throwing a couple of interceptions, Ferguson threw one pick on the day. Ferguson hooked up with Joe Cribbs and Jerry Butler 9 times apiece. While they were his favorite targets during the contest he spread out the ball to nine different receivers during the game. Ferguson exploited an injury depleted secondary. The Dolphins had two second year pros filling in for their regulars and Ferguson realized they were simply trying to take away the deep ball so he hit men over the middle with ease as he picked the secondary apart. The game was a battle from start to finish. The Dolphins had to battle back from 14-0 deficit early, it was an absolute seesaw battle after they knotted things up in the third. Every time the Dolphins would tie the game Ferguson and the Bills would answer back and retake the lead, finally with just 3:06 left in regulation, Marino hit fellow rookie Mark Clayton that gave Miami a 35-28 edge, it was the first time they led in the ballgame. Unfortunately for Marino and his crew, Ferguson tied it back up when he rolled out and hit Cribbs from four yards out, it was the second touchdown reception of the game for Cribbs. In overtime, the Dolphins had not one but two opportunities to win it with a field goal, the first time Uwe von Schamann missed wide right from 52 yards out, the second time he missed a 43 yarder wide right. It set the Bills up for victory. Ferguson worked his way to the 29 before putting on the shoulders of the Bills kicker joe Danelo, the kicker split the uprights from 36 yards out and the Bills had taken the shootout. Ferguson, who was drafted by the Bills in 1973 hadn't won a game in Miami up to that point and he said that game might have been the highlight of his career after the contest was in the books.