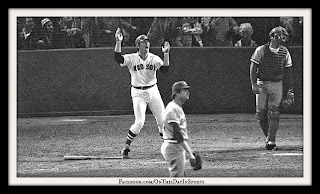 On October 21, 1975, Carlton Fisk of the Boston Red Sox hit one of the most dramatic home runs in World Series history. The solo shot in the bottom of the 12th inning in Game 6 of the Fall Classic gave his club a 7-6 win over the Cincinnati Reds and forced a winner takes all Game 7. The only question when it came towering drive down the left field line was would it be fair or foul. As the ball traveled down the line, Fisk tried to will the ball to the fair side of the foul pole by waving his arms toward the right side of the pole and it appeared to work as it hit the pole and won the ballgame. The game had been delayed by three days of rain but it was well worth the wait, as it became one of the most memorable games in not only the history of the Red Sox organization but in the history of the entire game. From the beginning the tension was high and the crowd of 33,205 was electric as they watched their team jump out to an early lead on a 3 run bomb by Fred Lynn in the first. The 3 run lead looked like it might be all Luis Tiant would need, the Red Sox starter was dealing through the first four innings, he gave up just two hits, and appeared to be on the way to his third victory in the series. Then came the fifth inning, Tiant gave up three runs, two came off a triple from Ken Griffey, then Griffey was knocked in by Johnny Bench.. Things got worse for Tiant in the seventh, he began the inning by giving up back-to-back singles before inducing a couple of flyball outs. Right when it looked like he might escape the inning with no damage done George Foster came up with a double that scored both runners. Tiant was able to get the last out of that inning but he couldn't get the first out in the seventh, the first man he faced was Cesar Geronimo and the Reds centerfielder took him deep to lead off the inning. Tiant left the game after the long ball and handed the ball over to his bullpen. Tiant was probably the most devastated individual in the entire ballpark as he left the game. His despair would turn to joy in the eighth when Bernie Carbo hit a pinch hit 3 run home run to tie the game up at 6 all. The shot by Carbo was historic in its own right, it was his second pinch hit home run of the series which tied a record that had been set 16 years earlier. Both teams had their chances to score from there but neither capitalized which just set the table for Fisk in the 12th. At that point in the game the Pat Darcy was on the hill for the Reds, he had worked two innings of scoreless ball and was looking for another, he had one little problem.... Carlton Fisk. The Red Sox catcher was the first man to bat in the inning and the last man to bat in the game as he hit the historic walkoff  blast. When Fisk was asked about the bomb he said "It was a sinker down and in. I knew the ball was either going to go foul or be a home run. Since the wind was blowing out I was afraid the ball might hook around the pole. In fact, I bet the wind took the thing about 15 feet closer to the line than it should have been and it wound up hitting the pole just before going around it." The scene with Fisk waving his arms as he tried to will the ball fair is a moment in baseball history that was absolutely epic. When the Reds third baseman Pete Rose was interviewed after the game he said "They'll be talking about this game for years to come." Rose hit the nail on the head when he said that because well after me and you both are long gone, people will talk about that home run.

Watch the historic shot here: http://wapc.mlb.com/play?content_id=2650440 Or you can watch the entire game here: http://www.youtube.com/watch?v=SQzL34qH7uo

Here's the box score: http://www.baseball-reference.com/boxes/BOS/BOS197510210.shtml
Posted by Wade Forrester at 4:03 AM