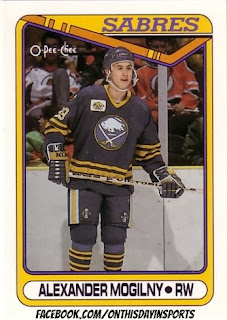 On October 5, 1989, at The Aud in Buffalo, New York, Sabres rookie Alexander Mogilny scored the first goal of his NHL career in a 4-3 win over the visiting Quebec Nordiques. Mogilny scored his goal on the first shift of his NHL career just 20 seconds into the contest. It was quite the way to make an entrance into the NHL. He spent the first six years of his career in Buffalo, making all star appearances in three of those six years. In 1995, he was moved to the Vancouver Canucks where he played until being traded to the New Jersey Devils in 2000. He would become a Stanley Cup Champion as a part of the '99-'00 Devils. After spending one full season in New Jersey, he signed a free agent deal with the Toronto Maple Leafs in 2001. He had two very solid years with Toronto, in fact he led the team in points in the '02-'03 season. In March of 2004, he recorded his 1,000th career point against the team that he had began his NHL career with, he was just the second Russian to reach the plateau, a few days earlier Sergei Fedorov had reached the mark. The lockout that came the following season was a hard thing for a veteran like Mogilny to recover from, at that point he was a 34 year old man.  He returned to the Devils as a free agent following the lockout, after 34 games he was moved to the minors so the team could make room for the next up and comer, a kid by the name of Patrick Elias. It spelled the end of his NHL career. It was a pretty decent career, when it was all said and done Mogilny scored grand total of 473 goals in the NHL as well as 559 assists. When he scored his first goal just 20 seconds into his debut he was a 20 year old kid, he retired from the NHL at the age of 36.