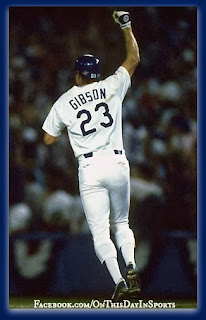 On October 15, 1988, in Game 1 of the World Series at Dodger Stadium in L.A., Kirk Gibson delivered a pinch hit walk off blast that will be remembered forever. The blast gave his Dodgers a dramatic come from behind 5-4 win over the Oakland A's. The Dodgers got the scoring started in the ballgame when Mickey Hatcher hit a two run shot off of Dave Stewart in the second before Jose Canseco erased the Dodger lead with a grand slam in the fourth. Mike Scioscia helped get the Dodgers a little closer with an RBI in the sixth but they still needed a hero to come up with a go ahead run. That hero would come limping to the plate in the ninth. Tony LaRussa sent his closer Dennis Eckersley in to take care of business in the ninth and it looked as if he might just be able to get the business taken care of quickly after he retired the first two batters he faced, then he issued a rare walk to Mike Davis that set the table for one of he greatest finishes to a ballgame in postseason history. Gibson had suffered a leg injury before the series began and when he was called into pinch hit for Alejandro Pena, you could tell that he was in obvious pain with every swing of the bat. With the count 2 and 2 on Gibson, Davis swiped second , then Eckersley threw a ball and the count was full. Then came the payoff pitch and Gibson made the most of it by putting everything he had into the swing that parked the ball over the wall in right. The fans in L.A. along with Gibson's teammates instantly erupted in celebration as Gibson trotted around the bases pumping his arm , legendary broadcaster Jack Buck proclaimed "I can't believe what I just saw!!!" It was truly an unbelievable moment that you would only expect to see in a Hollywood screenplay. The Dodgers would go onto win the title in 5 games over the heavily favored A's.

This home run was one of my favorite baseball memories from when I was a kid. I am a lifelong Cardinals fan, but as you can tell by this page I truly do appreciate all great moments in sports no matter what uniform a player is wearing. This was a ridiculously great moment, it was the first time in World Series history that a home run had decided an outcome of a come from behind win and as an 11 year old kid that scene of watching Gibson limping around the bases with his arm pumping is something I will never forget. I still get goosebumps when I watch it. http://www.youtube.com/watch?v=0toCMwEBwLo