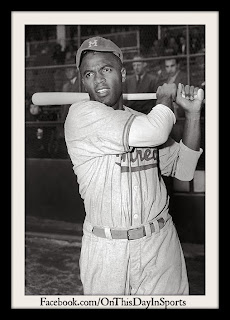 On October 23, 1945, the  President of the Brooklyn Dodgers, Branch Rickey signed Jack Roosevelt Robinson to a minor league contract that would be the beginning of breaking Major League Baseball's color barrier. The 26 year old that went by Jackie, had been a star running back at UCLA before joining the military following the attack on Pearl Harbor in December of '41. In July of 1944, Robinson's military career was nearly derailed after he ordered to sit in the back of a bus and refused, it led to a court martial hearing that would lead to an eventual acquittal. Following the acquittal he was transferred to Camp Breckinridge, Kentucky where he met a former Negro Leaguer that had played with the Kansas City Monarchs. He encouraged Robinson to write to owner of the team and ask for a tryout and Robinson did just that. Before Robinson heard back from the Monarchs he took a job at Sam Huston College in Austin, Texas as the athletic director, which included coaching the men's basketball team. While there he received an offer from the Monarchs and shifted his focus to baseball. The Negro Leagues wasn't an easy transition for Robinson who was used to a much more structured environment. The travel was grueling and he was frustrated by the disorganization of the league. However, he played well by hitting .387 in 45 games that included 5 home runs and 13 stolen bases. He had drawn the interest of several major league teams and even tried out for the Boston Red Sox. In the end the tryout with the Red Sox proved to be a humiliating experience for him as the Boston club was not serious about signing an African American. There was a club out there that was serious about signing an African American and they had Branch Rickey at the helm. After a search that lasted three years Jackie was the man that Rickey believed was capable of being the first African American to break into Major League Baseball and he was right. When he signed on to play for the Montreal Royals on that late October day he was joined by the son of Mr. Rickey, Branch Rickey Jr., who was the general manager of the minor league club. Rickey Jr. acknowledged the fact that they might lose ballplayers due to racism but he also stood behind Jackie and let people know that he was a good man who was college educated and they believed that he could conquer anything that was put in front of him. Jackie didn't let anyone down, after one year in the minor leagues he joined the Brooklyn Dodgers and became the first African American man to join the major leagues since Moses Fleetwood Walker played with the Toledo Blue Stockings of the American Association in 1884. Robinson did more than break the color barrier, he played his heart out on the field, and earned his way into Cooperstown by putting together a storied 10 year career. His career included rookie of the year honors in '47, an MVP award and a batting title in '49, and a World Series championship in '55.