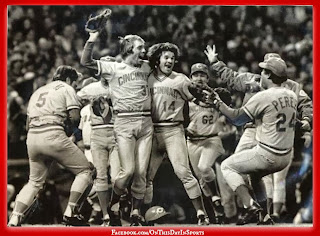 On October 22,1975,  just one day after the dramatic game winning home run by Carlton Fisk forced a winner takes all Game 7, a ninth inning two-out bloop single off the bat of Joe Morgan brought in what proved to be the winning run in a 4-3 Cincinnati Reds championship victory over the Red Sox at Fenway Park in Boston. The Reds were down 3-0 after the Red Sox scored three in the third off of starter Don Gullet before Tony Perez hit a 2 run home off of Bill Lee in the sixth that cut the lead to 3-2. Pete Rose tied the ballgame up in the seventh with an RBI single and this one was going to be a battle to the finish. With the scored still tied in the ninth,  Red Sox skipper Darrell Johnson called on reliever Jim Burton to take care of the Reds batters. Burton issued a free pass to Ken Griffey to lead ff the frame. He retired Cesar Geronimo on a sacrifice that moved Griffey to second, then induced Dan Driessen into a groundout that moved him over to third and just 90 feet away from taking the lead. Burton issued his second free pass of the inning to Rose who had absolutely torn it up throughout the series, then came Joe Morgan. The second baseman delivered with the clutch hit of a lifetime with the blooper into shallow center that brought Griffey into score what proved to be the game winner. The exclamation point was put on the championship with a 1-2-3 inning by Will McEnaney and the Cincinnati Reds were World Champions. It was the first of  back-to-back titles for the Big Red Machine and the ninth championship in franchise history.

Check out box score: http://www.baseball-reference.com/boxes/BOS/BOS197510220.shtml
Posted by Wade Forrester at 12:10 AM