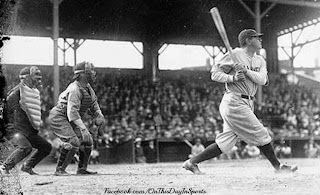 On October 6, 1926, Babe Ruth became the first man in the history of Major League Baseball to hit three home runs in one World Series contest. Ruth's three jacks helped lead his Yankees to a 10-5 victory over the Cardinals at Sportsman's Park in St. Louis. Just one day earlier the Cardinals took a 2-1 lead in the series behind an outstanding pitching performance by Jesse Haines, the Cardinals hurler also hit a long ball in that contest. While the fans in St. Louis were riding high after the performance by Haines, Ruth would bring them back down to ground as he became the first man to hit three bombs in one game in the Fall Classic. On paper it looked like a pitching duel was going to be the story of Game 4, the Yankees sent future Hall of Famer, Waite Hoyt to the mound who had 16 wins under his belt during the regular season while the Cardinals countered with 20 game winner Flint Rhem. Neither pitcher got out of the first inning without allowing a run. Rhem recorded two quick outs before he had to face the greatest slugger of the 20th century... Babe Ruth. The Great Bambino pounced on the first pitch he saw and  parked it on the street that sat beyond the right field stands. It was all the damage the Yankees would do in that first inning and the Cardinals would even things up on an RBI by Rogers Hornsby in the bottom half of the inning. Two innings later, Ruth went yard again, it was another solo shot that landed on the street past the stand in right. The St. Louis crowd loudly applauded Ruth after his second long ball, then they gave him another hand as he took his position in left field after the Yankees had taken a 2-1 lead. The fourth inning began with a strikeout of Lou Gehrig, it was followed by a walk to Tony Lazzeri, who scored on an RBI double by Joe Dugan. When Dugan smacked his double, center fielder Taylor Douthit and left fielder Chick Hafey collided as they attempted to make the catch. It was a scary moment in the ballgame as both players took a few minutes to get themselves back together. Douthit ended up gunning Dugan put at the plate to end the inning just minutes later. The Yankees looked to have all the momentum as they headed to the bottom of the fourth up 4-1. The momentum shifted in the bottom of the fourth, as the Cardinals took the lead with a three run frame, just one of those runs could be charged to the starter Hoyt as an error caused the inning to unravel for the Yankees. The Cardinals starter day ended in that big inning for the Birds, he was lifted for a pinch hitter by the name of Specs Toporcer who came through with a run scoring sacrifice. Unfortunately for the fans in St.Louis the momentum shift didn't last long, the Yankees struck for four in the fifth, the Cardinals had to use two relievers
in that inning, they faced Ruth one time and chose to walk him rather than have him send another souvenir to the street. That wasn't the case in the sixth, Ruth got a hold of a Hi Bell pitch and sent it over the wall in center field. It was his third bomb of the game, it was a two run shot, and it was a crushing blow that gave the Yankees a 9-4 advantage. The Yankees tacked on another run in  the eighth with an RBI by Earle Combs before the Cards walked Ruth in the eighth. The Cardinals scored their final run in the ninth with an RBI by Les Bell. At the end of the day, both teams had belted out 14 hits apiece. The three hits by Ruth were by far why the game will be remembered forever. However, it was a true battle between the two clubs. The Cardinals were playing in their first World Series in the modern era, throughout the early 1900's the team was the doormat of the National League and a new era of Cardinals baseball was about to begin. The Yankees would beat the Cardinals the next day in ten innings by the score of 3-2. They were just one win away from a title and they were headed back to Yankee Stadium. With their backs against the wall, the Cardinals pulled of a 10-2 victory in Game 6, then  a 3-2 win in Game 7 to take the title. It was the first Word Series championship season for the Cardinals. Ruth ended up being the last out of the deciding game after he was gunned down at second base in the bottom of the ninth. Even though the Yankees lost that series, the three home run game by Ruth was a great moment in sports history. I love the fact that the fans in St. Louis applauded the man who was beating the team they pulled for. It simply shows they knew they were witnessing something great. It was great.

To date, only three other men have joined Ruth with three home runs in a World Series contest. Ruth is the only man to do it twice, he repeated the feat in Game 4 of the '28 series in which his Yankees got revenge on the Cardinals by sweeping them.  Reggie Jackson joined him in 1977, then Albert Pujols in 2011, and finally Pablo Sandoval in 2012. Here's the box score: http://www.baseball-reference.com/boxes/SLN/SLN192610060.shtml

Posted by Wade Forrester at 1:18 AM