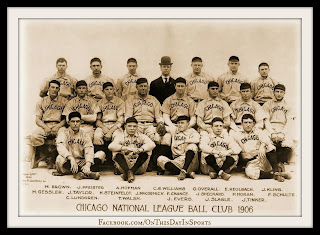 On October 4, 1906, with a 4-0 win over the Pittsburgh Pirates the Chicago Cubs won their 116th game of the season. They finished the campaign with a 116-36 record, which was a record setting .763 winning percentage which is a modern day record that still stands. The team included four future hall of famers, pitcher Mordecai "Three Finger" Brown, shortstop Joe Tinker, second baseman Johnny Evers, Frank Chance who manned first base as well as managed the club. The team was simply an all around great ballclub, along with Tinker, Evers and Chance, third baseman Harry Steinfeldt filled out the infield. Steinfeldt led the club with a .327 average and he also led the team with 83 RBIs. The offense was assisted by outstanding pitching, the staff's 1.76 E.R.A. was the lowest in the majors. Six members of the pitching staff recorded double digit victory totals. Brown led the way with 26, he was followed by  Jack Pfiester's 20, Ed Reulbach's 19, Carl Lundgren's 17,  and Orval Overall and Jack Taylor who both had 12 wins on the season. Brown's season was beyond remarkable, he posted a 1.04 E.R.A. which was a record until Dutch Leonard posted a 0.96 E.R.A. in 1914 for Boston. Brown's mark still stands as a National League record. The Cubs were in a heated battle with the New York Giants until June of that 1906 season, then they simply blew the competition away. They finished 20 games ahead of the Giants to claim the National League Crown. The Cubs would meet their crosstown rival the White Sox in the World Series. The Sox pulled of a huge upset by knocking the 116 game winners off in six games. It is considered one of the biggest upsets in the history of the series. The White Sox won the American League Pennant with 93 wins, which was 3 games better than the New York Yankees. The  team was known as "The Hitless Wonders" as they had posted just a .230 team average during the regular season. Somehow the Sox outhit the Cubs .198 to .196 in the series. After splitting the first four games the White Sox exploded for 26 hits in the last two games to pull off the improbable upset. It was a very disappointing end to a regular season for the Cubs team who had won 116 games during the regular season. The Cubs rebounded by winning back-to-back titles in 1907 and 1908. In 2001, the Seattle Mariners matched the win total of the 1906 Cubs, but since they played a 162 game schedule Seattle's winning percentage sits at .716.