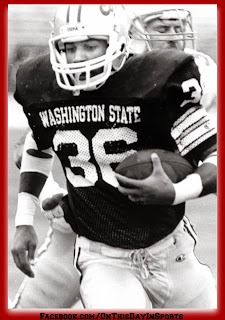 On October 27, 1984, Washington State Cougars running back Rueben Mayes set the NCAA record for most rushing yards in one game when he exploded for 357 yards on the ground in a 50-41 win over the Oregon Ducks in Eugene, Oregon. The Cougars running back topped the previous record by just one yard, it had been set six years earlier by Georgia tech running back Eddie Lee Ivery six years earlier. Mayes started off slowly with 41 yards rushing in the first quarter then he went f'n crazy by running 156 yards in the second, 73 more in the third, and he capped it off with 87 in the fourth. He broke the record with just 1:12 to go in the game. Mayes scored three times in the contest with scoring runs from 2, 69, and 12 yards out. The Cougars had a grand total of 663 offensive yards on the day with their running back responsible for more than half of them. While the record has been broken multiple times since that day in Eugene, Mayes' record still stands as the most rushing yards for any Pac 10 running back in a single game.