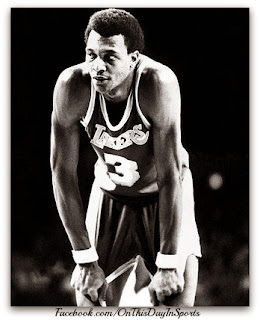 On October 28, 1973, Gail Goodrich knocked down 49 points and Elmore "The Rejector" Smith blocked an NBA record 17 shots in a 111-98  Lakers win over the Portland Trail Blazers in Los Angeles. Smith not only set the all time blocks record he recorded a triple double in the contest with 12 points, 16 rebounds, and the 17 rejections. 11 of the 17 blocks were recorded in the first half which is the most ever in one half of NBA basketball and the 17 blocks in one contest is a record that still stands today. The win was the fourth in a row for the Lakers and the 17th win in a row over the Trail Blazers who had not beaten them in 17 tries, just two days later they would stop that streak by beating them 114-113 on their home court in Portland.

Posted by Wade Forrester at 2:27 AM