October 30, 1943: Gus Bodnar Scores The First Goal Of His NHL Career 15 Seconds After It Began 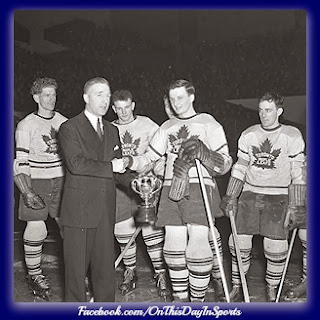 On October 30, 1943, just 15 seconds into his NHL debut, Maple Leafs center, Gus Bodnar scored the first goal of his NHL career, helping his team to a 5-2 victory over the New York Rangers in front of a home crowd in Toronto.  The 20 year old rookie would go onto score 22 goals along with 40 assists. The 62 point campaign would earn him the Calder Trophy as the league's best rookie. His rookie year proved to be the best of his career statistically. However, he was a two time Stanley Cup Champion as a member of the Maple Leafs in 1944 and 1945. He spent just four years in Toronto before being traded to the Chicago Blackhawks where he spent the next 7 years of his career, which included an All Star selection in 1951. Halfway through the '53-'54 season he was traded to the Boston Bruins. He spent one full season in Boston before hanging up the skates and join the coaching ranks. Described as a decent scorer and great playmaker, Bodnar played in nearly 700 games over 11 years in the NHL. He topped double digits in goals 7 times and was a player that most teams would love to have had. One of the greatest highlights of his career came in March of 1952, when  he helped Bill Mosienko set up the fastest hat trick in the history of the game. He finished his career with 142 goals and 254 assists. The picture included is Bodnar receiving the Calder Trophy following that rookie campaign.