October 12, 1976: Don Murdoch Becomes Only The Second Rookie To Score 5 Goals In One Game 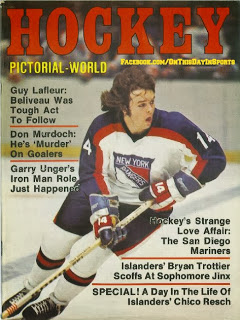 On October 12, 1976,  Don Murdoch of the New York Rangers tied a rookie record when he lit the lamp 5 times in a 10-4 rout over the North Stars in Minnesota. Only one other rookie scored 5 goals in one game before Murdoch and that was Howie Meeker who accomplished the feat on January 8, 1947 and after Murdoch did it no other rookie has been able to match it. Murdoch came storming into the NHL in '76, with the 5 goal game included he scored a total of 8 goals in his first three games in the league. The sixth overall pick on the '76 ameteur draft was well on his way to breaking the goals record for a rookie when an ankle injury ended his season 56 games into the campaign. Unfortunately for the man that was nicknamed   "Murder"  by his teammates he began to live a partier type of lifestyle that led to problems with drugs and alcohol. In '77 he was caught with cocaine in Toronto which made the comeback from the injury that much more of an uphill battle. His trial was delayed for over a year then when it was all said and done he got nothing more than a slap on the wrist by the court system. The head of the NHL John Ziegler delivered a much harsher punishment than the legal system did as he suspended him for an entire year in an effort to show the other players around the league that illicit behavior was unacceptable. The suspension was lifted after 40 games but Murdoch wasn't able to find what he had in that rookie campaign. In March of 1980 the rangers parted ways with Murdoch by trading him to the Edmonton Oilers, he spent one full season with Edmonton before he was moved to Detroit where he played one year there before hanging up the skates. His rookie campaign was something that had every Rangers fan thinking this kid would be great, unfortunately he traveled a road that kept him from living up to his potential. Murdoch spent just six years in the NHL, scoring a grand total of 121 goals, those 5 in Minnesota earned him a spot in the record books.