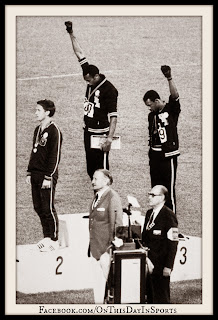 On October 16, 1968, Tommie Smith used and unbelievable burst of speed to rocket past his competitors on his way to a record setting 19.83 time in the 200 meter final at the Olympic Games in Mexico City. He was joined in his gold medal performance by teammate John Carlos who took the bronze. While most would think the record setting performance would have been the big story, it was what happened when they received their medals that had a lasting impact on the legacy of both men. The two sprinters stepped to the podium with bare feet and prominently displayed civil rights buttons. When the Star Spangled Banner was played both bowed their heads and raised a black glove salute to signify black power. Both men were protesting the way that African Americans were stuck in poverty in the United States and they said that the National Anthem was words of freedom that should only be applied to white Americans. The photo of the men raising their fists has become an iconic sign of the civil rights movement, as they stood for what they believed in. What followed the protest was outrage by the International Olympic Committee who ordered that the United States Olympic Committee discipline both athletes and under threat that every athlete would be banned from the games they suspended both Smith and Carlos and banned them for life from Olympic competition. This was a time in America that these men felt it was necessary to make a statement and I think they accomplished that goal, the medals didn't mean as much to either of them as letting the world know that the the people of their race should be treated better. I know that some might look at what they did as disrespectful to their country, but an entire race had been disrespected for many many years and they used one of the biggest stages in the world to let it be known. While their will always be work to do, it  is a fact that we have come a long way since that day in 1968.

This documentary tells the story quite well: http://www.youtube.com/watch?v=jnvCiKUlLAw
Posted by Wade Forrester at 1:13 AM