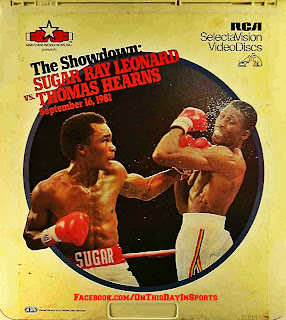 On September 13, 1981, Sugar Ray Leonard pulled off a late rally to beat Thomas The Hit Man Hearns in 14 rounds at Caesars Palace in Las Vegas. Leonard came into the fight with a 30-1 record while Hearns held a 33-0 record and had never even been knocked down in a fight. The fight was billed "The Showdown" that more than 23,000 got to witness in person while more than 300 million people tuned in on televisions all over the world. They witnessed an epic battle that began with a dominating performance by Hearns through the first five rounds. Leonard was showing the signs of battle with a swollen left eye by the time the bell rang in the fifth before he came back with a vengeance in the 6th and 7th rounds. The momentum shift was short lived as Hearns regrouped and won rounds 9 through 12 on all three scorecards. When Leonard came out in the 13th he looked nearly beaten, his eye was swollen almost completely shut and it looked like Hearns was on his way to a 34-0 record. Then the tide turned, Leonard stunned Hearns with a right cross then followed it up with a fury of punches that sent Hearns to his knees. Hearns was able to get back up then was knocked down again later in the round and was saved by the bell. Leonard carried the momentum into the 14th, he came out with three quick lefts that had Hearns dazed and staggering, Sugar Ray kept the gas pedal to the floor and continued an onslaught before the referee stopped the fight 1 minute and 45 seconds into that 14th round. The victory gave Leonard control of both the WBC and WBA welterweight crowns, making him the first common division champion since Roberto Duran held both title in 1978. The two boxers met again in 1989 only to fight to a split decision even though it looked as if Hearns got the best of Leonard, even Sugar Ray later admitted the decision should have went to his opponent.

You can watch the final round here: http://www.youtube.com/watch?v=pGzmZde6Pgc

You can watch the entire fight here: http://www.youtube.com/watch?v=1pB6sgVOADY
Posted by Wade Forrester at 12:08 AM