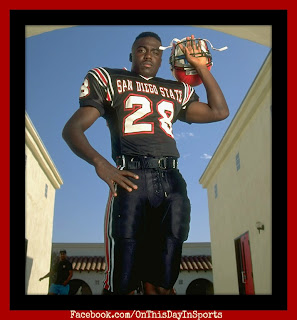 On September 14, 1991, in just his second collegiate game San Diego State Aztecs running back Marshall Faulk set an NCAA record with 386 yards on the ground and 7 touchdowns in a 55-34 win over the University of Pacific. The little known running back quickly made a name for himself as he ran right past Anthony Thompson's record of 377 yards that had been set while he was with Indiana  in 1989. Faulk's first carry didn't come until the 10:05 mark of the first quarter, because starter T.C. Wright had suffered a thigh bruise. Usually when a starter goes down one would simply hope the backup can get the job done, Faulk not only got the job done he obliterated records on the way. By the end of the third quarter he had 323 rushing yards that broke the freshman rushing yards record for a running back and he was not finished. He put an exclamation point on the performance with another 63 yards in the fourth to bring his total to the eye popping 386 on the day. He scored on touchdown runs of 9, 5, 61, 7, 47, 2, and 25 yards falling just 1 td short of tying Howard Griffith's mark of 8 touchdowns that had been done just one year earlier. With a two point conversion under his belt Faulk was also just four points shy of Griffith's record of 48 points scored in a single game. Faulk reached his total on 37 carries which was an average of more than 10 yards per carry. In November of that same year Tony Sands of Kansas ran past Faulk's record with with 396 rushing yards against the University of Missouri. Sands' record stood until 1999 when TCU running back LaDainian Tomlinson ran wild against UTEP with 406 yards on the ground. The record day for Faulk turned out to be the beginning of a legendary career that ended in Canton, Ohio.

Posted by Wade Forrester at 2:11 AM