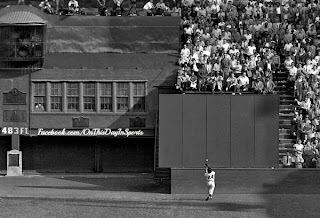 On September 29, 1954, one of the most sensational defensive plays in the history of the game was made by New York Giants center fielder Willie Mays during Game One of the World Series at the Polo Grounds in New York. With the score tied 2-2 in the top of the eighth the Cleveland Indians were threatening to take the lead after starter Sal Maglie walked Larry Doby then gave up a single to Al Rosen. The Giants skipper Leo Durocher decided he was going to call on a lefty by the name of Don Liddle to pitch to left-handed hitter Vic Wertz then Mays made a play that will be remembered forever. On a 2-1 count Wertz took one of Liddle's pitch for a long ride deep to center, the 23 year old Mays, who was in his first full year in the majors was playing in shallow center and took off for the ball that looked like Superman would have had trouble catching. He tracked it down and made the over-the-shoulder grab on the warning track which was 420 feet away from home plate. After he made the grab Mays turned around and gunned the ball back to the infield, Doby might have been able to score if he would have tagged up in time, but since it looked as if there was no way he would make the play Doby was only able to tag up in time to get to third base while Rosen was still stuck at first. Wertz was the only batter Liddle faced that day, he joked that at least he got his man, I hope he bought Mays a nice steak for helping him get that man. Marv Grissom took over pitching duties for the Giants and walked a man before sitting down the next two to get the Giants out of the jam. With the crowd still buzzing in the tenth, Mays drew a one out walk, after Mays stole second the Cleveland starter Bob Lemon walked Hank Thompson  in hopes of an inning ending double play. Durocher called on Dusty Rhodes to pinch hit for Monte Irvin and the move won him the ballgame as Rhodes took pounced on the first pitch he saw and parked it over the wall in right. The crazy thing about Rhodes' homer was it barely cleared the wall which was a little more than 270 feet away from the dish. What would have been a sure home run in most ballparks was stolen away from the Indians in the eighth, then what looked like a lazy fly ball in the tenth beat them. It can be a crazy game, the Giants would go onto sweep their way to a Championship, it was their fifth title in the history of the franchise and their last in New York.