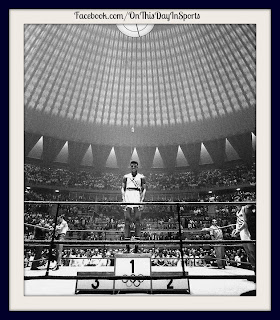 On September 5, 1960, an up and coming 18 year old American boxer by the name of Cassius Clay won Olympic Gold with a unanimous decision over Zbigniew Pietrzykowski, a three time European Champion from Poland. The kid from Louisville, Kentucky that would become known as Muhammad Ali had already won AAU and Golden Glove competitions as he was establishing himself in the world of boxing. When Clay was invited to join the Olympics in Rome he nearly turned down the opportunity due to a fear of flying. Ultimately, Clay chose to make the flight while wearing a parachute just in case he needed it. Once he had his feet on the ground in Italy he became known as "The Mayor of Olympic Village" because of his outgoing personality. Clay beat Belgian Yvon Becaus, Soviet Gennady Shatkov, and Australian Tony Madigan before the gold medal fight against Pietrzykowski. After Pietrzykowski held his own the first two rounds, Clay battered him to the point that he had blood coming from his nose and mouth before the bell rang in the third and final round. Within seconds the decision went to the young Cassius Clay. He was 18 years old, a gold medal winner who was on top of the world. This was just the beginning of the legendary career of Muhammad Ali.

You can watch the fight here, the third round starts at 6:25. The video has the wrong date at the beginning of the fight but it was the best footage I couldfind that included audio.
https://www.youtube.com/watch?feature=player_embedded&v=O8eqAve3sZw
Posted by Wade Forrester at 12:46 AM