September 9, 1960: The Broncos and Pats Battle In The First Ever AFL Game 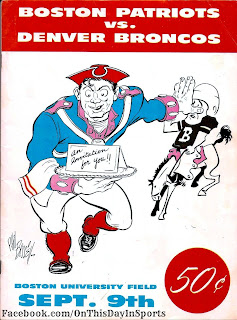 On September 9, 1960, the first ever AFL regular season game was played. The game was a contest between the Denver Broncos and the Boston Patriots at Nickerson Field in Boston. The Broncos surprised everyone by pulling off a 13-10 victory after losing all 5 of their preseason games. The charge by the Denver squad was led by quarterback Frank Tripucka and running backs Al Carmichael and Gene Mingo. The quarterback threw for 180 yards with a touchdown and a pick, while his running back Carmichael proved to be his go to guy as he hauled in 130 of the 180 yards Tripucka produced. Mingo's contributed with 66 yards on the ground and a 79 yard punt return touchdown in the third quarter that proved to be the decider in the first ever AFL game. The Pats did score late with a Jim Colcough pass to Butch Songin but the Denver defense held them off and pulled off the upset to kickoff the season.