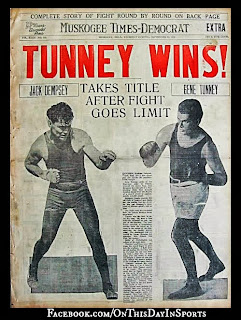 On September 22, 1927, with more than a 100,000 people on hand at Soldier Field in Chicago, Gene Tunney retained his heavyweight title by beating Jack Dempsey with a unanimous decision after ten rounds of battle. The fight will forever be known as the long count fight because of a a seventh round knockdown of Tunney that took nearly 15 seconds for the fighter to pick himself up off the canvas. Tunney put on a dominant performance through the first six rounds then Dempsey came out in the seventh and let the champ have it, he unleashed a combo that sent Tunney to the canvas. It was the first time in Tunney's career that he had been knocked down and he was dazed and confused. By the rules of the Illinois State Athletic Commission a boxer had to return to his corner after knocking down his opponent, the count would not begin until he was in his corner. After Dempsey put him on the floor he hovered around him for 5 or 6 seconds while the referee was trying to direct him to his corner so he could begin the count. When he finally got over there the count began and the disoriented Tunney began to get himself together and by the count of nine he was back on his feet. The mistake by Dempsey cost him the title that he had lost to Tunney one year earlier. Once Tunney was back on his feet he regained control of the fight the rest of the way to to take the match by unanimous decision. It was a very controversial fight at the time as some people thought it may have been fixed. I tend to see it as a major mistake by one of the great boxers of the era that cost him a title. It was the last fight of Dempsey's career and the next to last fight for Tunney. In July of '28 Tunney successfully defended his title against Tom Heeney, within days of that fight he announced his retirement.

You can watch footage of the fight here: http://www.youtube.com/watch?v=-OeeCfbahwQ
Posted by Wade Forrester at 12:01 AM