September 27, 1940: Floyd Giebell Pitches The Tigers To a Pennant 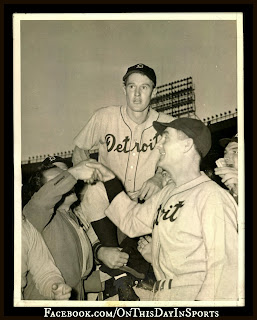 On September 27, 1940, 30 year old Detroit rookie Floyd Giebell outdueled Bob Feller of the Cleveland Indians in a 2-0 pennant clinching win for the Tigers. The Tigers club hadn't been on the radar at the beginning of the season, however, they battled to the end and found themselves in a heated pennant race with the Yankees and Indians. The day before the contest that decided the season the Yankees fell out of contention with a 6-2 loss to the Philadelphia A's. With both the Indians and Tigers sitting on 89 wins apiece it all came down to the one game, surprisingly Detroit's manager Del Baker decided to start Giebell rather than aces Schoolboy Rowe or Bobo Newsom. The choice to pitch Giebell paid off as he scattered 6 hits in the unlikely victory over the ace of the Indians. Feller allowed just three hits with one of them being a fluke double by Hank Greenberg that was lost in the sun by Indians center fielder Roy Weatherly. The hit that hurt the most came off the bat of Detroit's Rudy York in the fourth, with two out, Charlie Gehringer received a free pass before York came to the dish and hit a towering two run home run that would be all that Giebell needed to pitch the Tigers to the A.L. Pennant. Giebell had spent most of his season with a minor league club before he found himself on the major league roster. He had recorded one win before this all important game with a hostile crowd in Cleveland. Before the game even began the crowd was throwing fruits, vegetables, and eggs at the Tigers players. After the game began the hostility continued, one fan dropped a fruit basket from the upper deck and hit catcher Birdie Tebetts in the head knocking him out cold, the way it was reported in the paper the next day the catcher was not seriously injured by the falling fruit. The Chief umpire Bill Summers had to warn the crowd that if it continued that every flyball any Cleveland player hit in the air would be called out if the visitors were interfered with. The hostile crowd made Giebell's victory that much more impressive, he rarely went to his fastball as he worked the corners to keep hitters off balance. Four times the Indians put two men on in an inning but Giebell pitched like a pro and kept them from doing damage as he pitched his team to a pennant. It was the highlight of Giebell's career, it was just his second of three major league victories and an important victory it was. The Tigers would fall to Reds in 7 games in the World Series. Giebell wasn't allowed to pitch in the series because he only appeared in two games during the regular season. That second appearance in 1940 punched a ticket to the Fall Classic.

Check out the box score: http://www.baseball-reference.com/boxes/CLE/CLE194009270.shtml