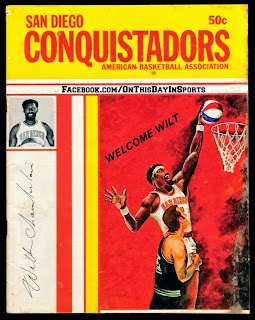 On September 26, 1973, Wilt Chamberlain signed a 3 year $600,000 deal with the San Diego Conquistadors to become a player/coach of the ABA club. This marked the end of his storied NBA career and the beginning of a legal battle for the former superstar. Chamberlain's former team the Los Angeles Lakers refused to let him play as they still had an option on his contract. The team had no issues with him coaching but promised a legal fight if he were to play. The Lakers won the battle that followed and Chamberlain wasn't able to play for the Conquistadors, instead he took on coaching duties. Chamberlain's run as a coach was nowhere near as legendary as his run as a player. He left most of the coaching duties to his assistant Stan Albeck as the team posted a 37-47 record in the '73-'74 season then lost in the Division Semi-Finals to the Utah Stars. That one season proved to be the only season Chamberlain would spend with the Conquistadors, coaching just wasn't for him. He officially retired following that one campaign in San Diego.