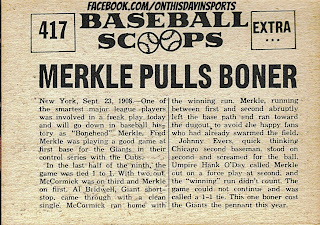 On September 23, 1908, with Giants in the middle of a heated pennant race at the Polo Grounds in New York, first baseman Fred Merkle committed a mental error that became known as "Merkle's Boner." The mistake cost the Giants the pennant. They were in a fierce battle with the Cubs and had them in town for what was sure to be a great battle. The two teams found themselves tied at 1 as they headed into the bottom of the ninth. The Giants quickly found themselves with two outs before Frank McCormick reached first base with a single, then the 19 year-old Merkle came to the plate and delivered a single that put McCormick on third just 90 feet away from victory. Shortstop Al Bridwell came through with a what looked to be the game winning single that brought fans storming onto the field. In all the commotion Merkle simply ran toward the locker room and did not touch second, an alert Johnny Evers called for the ball then tagged second base and Merkle was called out and the run did not score. With the players already in the locker rooms the game was called a tie. Despite protests the tie stood and the game was replayed on October 8th with the Cubs winning 4-2, the replay win secured the pennant for the Cubs and they went onto win the World Series in 5 games over the Detroit Tigers. That play might have the funniest nickname in the history of sports and the picture that goes along with it makes me laugh, however, that one play defined his career, and gave him the nickname of "Bonehead." Despite the mistake Merkle put together a solid 14 year career with the Giants, Dodgers, then his last 4 seasons were spent with the Cubs. Sort of an irony there that he would end up playing for the team that he had helped win a pennant by committing a mental error. While I find the nickname of the play funny, and the picture that goes along with it even funnier, I can't help but feel sorry for the guy as he had to carry it with him for the rest of his life.

Some believe the Cubs curse started that year. I guess they look at it as the baseball gods getting even.

Here is a 2 part video that documents the events and the things that followed.
The Fred Merkle Story
Part 1: http://www.youtube.com/watch?v=kZWt18RWnCU