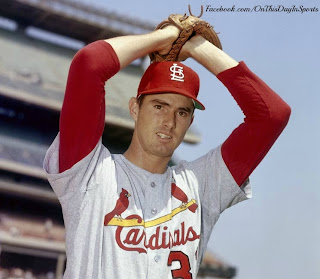 On September 15, 1969, at Busch Stadium in St. Louis, Cardinals hurler Steve Carlton struck out 19 Mets batters to establish a new major league record. Unfortunately the 24 year old lefty surrendered a pair of two-run homers to New York outfielder Ron Swoboda that proved to be all the Mets needed as they went onto win 4-3. Carlton struck out the side in the first, second, and fourth innings and entered the ninth with 16 Ks which was just two short of  the record that was held by Sandy Koufax, Bob Feller, and Don Wilson. Carlton opened the ninth with a strikeout of pitcher Tug McGraw, then tied the record by striking out Bud Harrelson, before breaking the record with a strikeout of rookie Amos Ortiz, it was the fourth strikeout of the day for the rookie. In the bottom of the ninth the Cardinals briefly threatened as McGraw put a couple men on before he was able to get out of the inning and lock down his 8th win of the season. As dominating as the performance was it turned out the '69 Mets were a team of destiny as they went onto win the World Series. A Variety of men have tied Carlton's record and two have surpassed him Kerry Wood struck out 20 in 1998 and Roger Clemens struck out 20 in 1986 then again in 1996. The game for Carlton was undoubtedly frustrating but he understood it's just how baseball goes, can't win'em all but usually if you fan a record amount of batters your odds are pretty good.

Check out the box score: http://www.baseball-reference.com/boxes/SLN/SLN196909150.shtml

Here is the list of men who have recorded 18 or more strikeouts in a game: http://en.wikipedia.org/wiki/List_of_Major_League_Baseball_pitchers_with_18_strikeouts_in_one_game