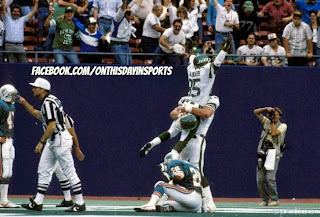 On September 21, 1986, with more than 71,000 fans in the stands at The Meadowlands in New York, the Jets outlasted the Miami Dolphins in a record setting 51-45 overtime win. It was a quarterback duel between the Dolphins Dan Marino and the Jets Ken O'Brien. Marino hit 30 of 50 passes for 448 yards and recorded a career best 6 touchdown passes. On the other side of the ball Ken O'Brien had quite the day himself, the Jets signal caller hit 29 of 43 for 479 yards and 4 touchdowns all to wideout Wesley Walker. The two teams combined for 884 net passing yards which surpassed the former mark of 883 set by San Diego and Cincinnati in 1982. Walker thought he gave the game away late in the fourth quarter after he fumbled the ball that led to a Miami touchdown that put them in front 45-38. Walker was able to put the fumble to bed by catching a 21 yard pass by O'Brien that tied the ballgame as time expired. Walker said he was in shock after he scored the touchdown and he didn't even realize there was no time left on the clock. The best was yet to come for the speedy wide receiver, in overtime he caught a 43 yard bomb from O'Brien to win it for the Jets. The 96 total points set a record for most points scored in an overtime contest, it was matched by the Arizona Cardinals and the Green Bay Packers in 2010. Pretty wild day for Walker and the J-E-T-S.