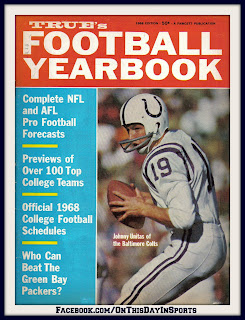 On September 18, 1966, Baltimore Colts quarterback Johnny Unitas surpassed Y. A. Tittle's record of 212 touchdown passes in a 38-23 comeback win over the Vikings at Metropolitan Stadium in Minnesota.  Unitas' Colts found themselves in a 16-0 hole before Unitas connected with John Mackey on an 83 yard bomb that put the team on the board. The Colts added three more points to the board to make it 16-10 at the half and Johnny U. was far from done. He found Raymond Berry with a 40 yard touchdown pass int he third to tie Tittle's record and give his team their first lead of the day before breaking the record with a 26 yard strike to John Mackey. Despite Unitas' heroics the Vikings didn't go quietly, running back Bill Brown rumbled in from 27 yards out and closed the gap to 24-23 with a little more than 11 minutes to go in the contest. Unfortunately for the fans in Minnesota that was as close as they would get as the Vikings quarterback Fran Tarkenton fumbled the ball near his own endzone that was initially picked up by a Vikings player before being fumbled again in the endzone, this time it was recovered by Colts linebacker Mike Curtis for a touchdown. Unitas put a little icing on the cake with a 4 yard pass to Tom Matte to bring his touchdown total to 214. Unitas would finish his career with 290 touchdown passes and more than 40,000 yards as he set a number of records including 47 consecutive games with a touchdown pass, many thought that record would never be broken but it fell in 2012 when Drew Brees surpassed the mark. While all of Unitas'records have since been broken he was one of the most prolific signal callers of his time that led to an enshrinement into the Pro Football Hall of Fame in 1979.

To date, Unitas' 290 touchdown passes in good for ninth on the all time list. You can view the list here: http://www.pro-football-reference.com/leaders/pass_td_career.htm