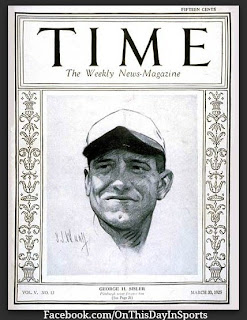 On September 17, 1922, with more than 31,000 fans in the stands at Sportsman's Park in St. Louis, Browns first baseman George Sisler extended his hitting streak to 41 games in a 5-1 win over the New York Yankee. The 41 consecutive games with a hit surpassed Ty Cobb's mark of 40 in a row that he had accomplished 11 years earlier. After he went hitless in his first two at bats Sisler lined a Waite Hoyt pitch up the middle to surpass Cobb and was within three of  Wee Willie Keeler's all time record of 44 games in a row with a hit. After Sisler extended his streak he came around to score on a single by Hank Severeid as the Browns quickly erased a 1-0 deficit by scoring 3 runs in that sixth inning. Sisler's streak began on July 27 when he picked up a hit off of Yankees hurler Joe Bush, ironically Bush would end his streak the day after he surpassed Cobb. The Browns and Yankees were in a heated pennant race and the win pulled the St. Louis squad within a half game of the league lead. The race would go right down to the wire with the Yankees taking the American League Flag with a one game lead over St. Louis. The season by Sisler was one to be remembered, as he led the league with a .420 average on his way to winning the A.L. batting title as well as the league's MVP award, just two years earlier Sisler recorded 257 hits which was a record that stood until Ichiro broke it with 262 hits in 2004. Sisler put together a remarkable career, over 15 years in the big leagues he picked up 2,812 hits, hit 102 home runs, and knocked in 1,175 runs while carrying a .340 average that led to an induction into Cooperstown.

Here is a great highlight video that tells the story of Sisler's career: http://www.youtube.com/watch?v=VDAjqaqQkoI

Check out the box score: http://www.baseball-reference.com/boxes/SLA/SLA192209170.shtml
Posted by Wade Forrester at 12:05 AM