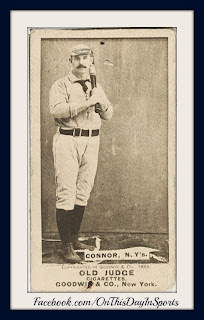 On September 10, 1881, at the Haymakers Grounds in Troy, New York, Roger Connor of the Troy Haymakers hit the first ever grand slam in the history of the major leagues. Connor's historic shot came with the game on the line in the bottom of the ninth with his Haymakers trailing the Worcester Ruby Legs by three runs. The first ever grand slam came off of Ruby Legs hurler Lee Richmond and propelled the Haymakers to an 8-7 walkoff win.  Many historians consider Connor baseball's first great slugger, the fact that he played in the deadball era might make people look at his 138 career home runs and scoff, however, Connor's 138 homers were the major league record until Babe Ruth surpassed him in 1921. Connor led in a wide variety of offensive categories throughout his 18 year career but hardly got the recognition. After Hank Aaron surpassed Babe Ruth's home run record in 1974, Connor's name began to be tossed around since he was the man that the Babe had surpassed so many years before. In 1976 a Special Veterans Committee elected Connor into the Baseball Hall of Fame, nearly a decade after he hit the first grand slam in the history of the game, he was among baseball's immortals.

If you would like to read an extensive bio on Connor's life and times check this out: http://sabr.org/bioproj/person/4ef2cfff

This link will provide you with Connor's career stats and accomplishments: http://www.baseball-reference.com/players/c/connoro01.shtml
Posted by Wade Forrester at 2:01 AM