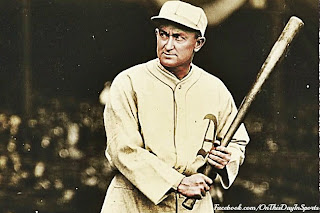 On September 3, 1928, Ty Cobb picked up a pinch hit double for the Philadelphia A's in a 6-1 loss to the Senators at Griffith Stadium in Washington D.C. The hit proved to be the final and 4,191st hit of his storied career. The man who became known as the "Georgia Peach" picked up his first hit on August 30, 1905 against Jack Chesbro of the New York Highlanders. Cobb's 4,191 hits was an all time best until Pete Rose surpassed him in 1985, only Rose and Cobb reached then surpassed the 4,000 plateau. 3,900 of Cobb's 4,191 came with a Detroit Tigers uniform on, he played 22 of his 24 seasons in Detroit where he established his legendary career that included a plethora of records, including the all time hit record. While some of his records were broken, some still stand, Such as the highest career batting average as he hit .366 in his 24 years in the majors and he won a batting title, a record 12 times, which included 9 in a row from 1907 to 1915. Cobb could do it all, he also held the all time stolen base record with 892 until the great Lou Brock surpassed him in 1977. One of the most astounding numbers that Cobb posted throughout his career was he hit .320 or higher in 23 of his 24 years played. He picked up 200 hits times and he led the American League in the hit department 8 times. His legacy is a strange one since he wasn't very well liked, however, the man was ballplayer who played the game with grit and determination. The simple fact that it took 50+ years for Rose to surpass the hits record is a testament to how hard it was to reach that plateau. While Cobb picked up his last hit on that early September day his final plate appearance didn't come until 8 days later, it was the end of a legendary career that will be remembered forever.