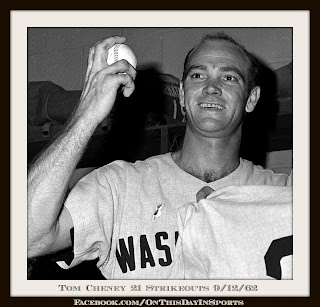 On September 12, 1962, Washington Senators pitcher Tom Cheney struck out 21 Orioles batters over 16 innings at Memorial Stadium in Baltimore. The 21 Ks set a major league record that still stands today for most strikeouts in one game. The Senators jumped out to a 1-0 lead with an rbi by Bud Zipfel only to have the O's knot things up with a pinch hit rbi single by Charlie Lau in the seventh. While the Orioles starter Milt Pappas went 7 innings before he handed it over to his bullpen, the 27 year old Cheney was in it for the long haul and a long haul it was. The Senators hurler only had 13 strikeouts after the regulation nine innings. But as the game dragged on the total just kept rising as he struck out two in the 10th, two in the 11th, then two more in the 14th to set a modern major league record with 19. He surpassed the record with his 20th K in the 15th before Bud Zipfel hit a solo shot in the top of the 16th to put his Senators ahead 2-1. In the bottom of the 16th Cheney allowed a his tenth hit of the game before he finished off the Orioles with his 21st strikeout of the game as he caught Dick Williams looking for the record setting K. Before that day Sandy Koufax and Bob Feller shared the modern record for most strikeouts in one game with 18, they both did it in the regulation nine. Cheney pitched 8 years in the majors posting a 19-29 record, one of those 19 wins proved to be a record setting performance that has stood the test of time. A variety of pitchers have recorded 20 K's in one contest but only one has recorded 21.

Check out the box score: http://www.baseball-reference.com/boxes/BAL/BAL196209120.shtml